Abe and Addie were surrounded by the meat they would eventually eat. It mooed, grunted, squealed, bleated, cackled, crowed and gobbled. They fed it, watered it, doctored it, housed it, sometimes even named it. They cared for it but they did not anthropomorphize or romanticize it, for they knew it would eventually end up on the dinner table, someone else’s if not their own..

Meat – be it beef, pork, chicken or turkey – was an integral part of every meal. Access to meat wasn’t the problem – all the cows, pigs, chickens and turkeys they raised provided an endless supply. Preserving it was, for Addie had neither freezer nor refrigerator. Fortunately, they had options.

Just how does one “salt” beef? Here are the instructions from The Cook Not Mad, or Rational Cookery, first published in Canada in 1831 (reprinted 1972 by The Cherry Tree Press, Toronto):

Put together three quarts salt, six ounces salt petre, one and a half pint of molasses, and water sufficient to cover your meat after laid into the barrel. Sprinkle the bottom of the barrel with salt, and also lightly sprinkle between the layers of meat as you pack, when done, pour on your pickle and lay on a stone or board to keep the whole down. Beef salted after this method during the fall or winter may be kept nice and tender through the summer by taking it up about the first of May, scald and skim the brine, add three quarts of salt, when cold pour back upon the beef.”

Canning meat was an alternative to salting it. This could be tricky because, if the meat wasn’t cooked long enough in the hot water bath, it could spoil and become infected with botulism. Despite the risk, Addie did can beef and chickens. (As an aside: we canned chickens when I was growing up; canned chicken was one of our favourite Sunday lunches.)
Friday, November 24, 1933: Helped Addie cut up meat for canning purposes.

Keeping meat frozen wasn’t a problem once winter and its freezing temperatures arrived – the whole outdoors became a freezer. Abe and Addie had what they called the “meat box;” it sat outside on the north side of the house. After cutting up the meat, they packed it in the box along with ice cut from Pinto Creek. They also put the cut meat in sacks and buried them in wheat in the granary. The wheat moderated fluctuations in the daily temperature and often kept the meat frozen through to spring.
Monday, December 4, 1933: Addie and I repaired meat box. Fair and colder, light snow in early am.
Friday, December 9, 1938: hauled 3 quarters beef to house & helped Addie cut up and sack same so that it could be frozen later then hauled same to granary to be stored in wheat bin.

If there was more meat than Abe and Addie could deal with, they sold some of it to the local butcher or one of the townsfolk who did not have their own cattle.
Tuesday, December 12, 1933: Cut down beef, moved fronts to house. Addie assisted. Hitched up and delivered hind 1/4 (137 lbs) to Rev. Wilkinson in pm.

With the basement shelves full of canned vegetables and fruit, and meat “on the hoof,” in sealers or frozen in either the meat box or the granary, Addie was always able to spread a substantial meal for the family and for friends when they came calling:
Thursday, December 8, 1938: Mrs. Alex McCaslin assisted Addie & Edith entertain the Ladies Aid in pm. Alex came at 6K, both having supper here & staying for the evening. Had first roast of new beef which was of excellent quality. 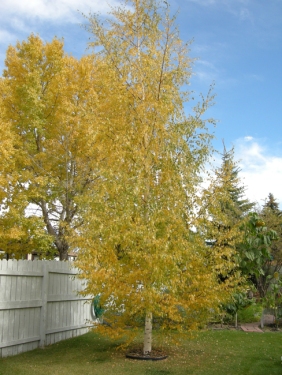 The fallen leaves lay strewn on the ground,
resplendent in their gold, whilst up above
the screeching jay — a blaze of brilliant blue —
competes with magpie at the feeding station.
Sparrows, dressed in drab, with dove and finch
forage and feed on scratchings in the grass,
and startled, whir as one to hide and watch
and wait while tawny, sharp-clawed predator
creeps, crouches, switches tail, departs.
The last warm wind of summer shakes the trees
and sends leaves rattling down. The lady bugs
take shelter ‘neath this blanket, sleep and dream.

For Autumn’s not the end, just Nature’s pause.
To give much needed rest, its only cause. 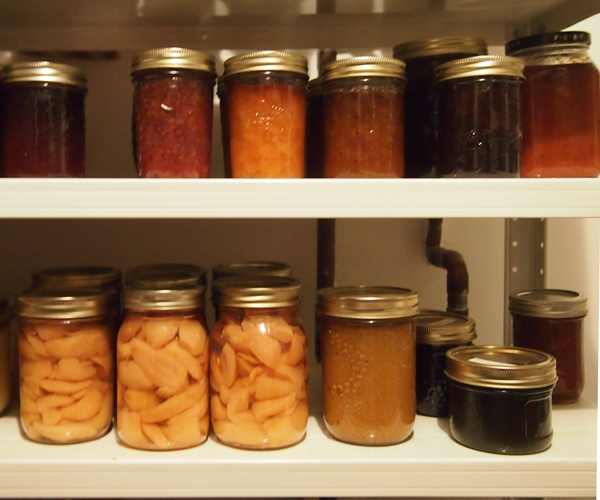 Gardening season on the northern plains is short. The rule of thumb is: don’t plant before Victoria Day (May 24) and pray the first frosts don’t come until mid-September, preferably later. Assuming the garden isn’t eaten by various bugs or frozen out or dried out or rained out, then comes the task of preserving all that bounty for the coming winter. END_OF_DOCUMENT_TOKEN_TO_BE_REPLACED

Mommy Daddy guess what I did at Nana’s and Bunka’s I held a baby chick it was so soft and fuzzy not like the plastic chick in my Easter basket but it pecked my hand and it hurt so I dropped it and it ran away and then I helped Nana pick up eggs from the big hen house and she told me that baby chicks come out of eggs but she’s teasing isn’t she Mommy cause I’ve seen you crack eggs and nothing comes out but eggs and then Uncle Peter took me to the pig pen and the pigs are so big but one was a mother with baby pigs that wouldn’t stop squealing Uncle Peter held me so that I could scratch the pig’s ear a mother pig is called a sow did you know that Daddy and then I went with Bunka to the barn and he milked the cows yuck milk comes out of a bag under the cow I don’t know if I’ll drink milk again but I helped Bunka pour some milk into a pan for the barn kitties and all they did was spit and hiss and run away when I tried to pet them why would they do that Mommy I had fun can I visit Nana and Bunka again soon?

Saskatchewan born and bred. Curious about everything. Writes for the joy of it.