No one panicked. Dry years were not unknown – there had been the occasional one or two every decade so far. Everyone knew the rains would come again “next year.” Abe certainly believed so, for in the fall of 1929, he purchased a new Rumley combine.

But the rains didn’t come “next year,” or for several years after. Crops struggled. What little grew was quickly devoured by grasshoppers, that is, if it wasn’t blown away first. Abe recorded annual yields between 2 and 9 bushels per acre. In 1937, the year of no rain, it plummeted to 1/3 bushel per acre, a “total crop failure.” END_OF_DOCUMENT_TOKEN_TO_BE_REPLACED 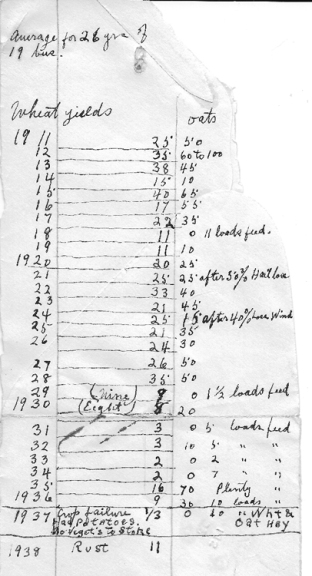 One of the treasures in the “Hanna Archives” is a scrap of paper on which Abe recorded crop yields from 1911 to 1938. Yields vary from the “bumper” crop of 35 bushels per acre in 1928 to the total crop failure of 1937 – 1/3 bushel per acre. It is a vivid illustration of the uncertainty of farming.

Abe had the misfortune of acquiring land in what is known in the Canadian prairies as the Palliser Triangle. It is a semi-arid, formerly mixed-grass area that encompasses southwestern Saskatchewan and southeastern Alberta, with its apex at approximately Lloydminster on the Saskatchewan-Alberta border. It is characterized by low precipitation – 300 mm or about 12 inches per year. About 70% falls as rain during spring to autumn, the remainder as snow in the winter. Spring and autumn rains are usually what are commonly called “general rains” – a two or three-day “soaker” that covers most of the area. Summer rains are localized, sporadic and occasionally violent thunderstorms that bring brief heavy rains, often combined with strong winds that can lodge (beat down) crops and hail that can destroy them. It is with good reason that, on the prairies, hail is called the Great White Combine.

The region gets its name from Capt. John Palliser, an Irishman commissioned in 1857 by the British Government to explore the western regions of Rupert’s Land of British North America. Its purpose was to determine whether or not the western regions were suitable for settlement and how the region could be linked to both the British Province of Canada (Ontario and Quebec) to the east and the Pacific Ocean to the west. The expedition lasted three years. In 1863, Palliser presented his report to the British House of Commons, which appears to have been so overwhelmed by its size and comprehensiveness that it met the fate of so many such commissioned reports – it was shelved and all but forgotten.

As fate would have it, the Palliser expedition explored the southern prairies during a dry period. He concluded that the region was unfit for agriculture and better suited to livestock. At the same time, another expedition under the leadership of Henry Youle Hind, also explored what is now southern Manitoba and Saskatchewan, although Hind traveled primarily through the parkland region bordering the northern edge of the mixed-grass prairies. Hind reached much the same conclusion – the mixed-grass prairie was unsuitable for agriculture.

A decade later, the political situation had changed. The British North American Act of 1867 united four British colonies – Ontario, Quebec, New Brunswick and Nova Scotia – to form the Dominion of Canada. Two years later, the Canadian government purchased Rupert’s Land (all the territory that drains into Hudson Bay) from the Hudson’s Bay Company. In 1870, the Red River Resistance under Louis Riel brought the Province of Manitoba into Confederation. And in 1871, Prime Minister Sir John A. Macdonald lured the colony of British Columbia into Confederation with the promise of a railroad.

Macdonald was growing increasingly uneasy about American expansionist efforts in the west. He saw the railroad as a means of encouraging British settlement on what he thought of as unoccupied prairie lands – never mind that indigenous people were already living there – thereby ensuring Canadian sovereignty over the territory.

The original route went through the parkland that bordered the north edge of the Palliser Triangle. However, Sir Sanford Fleming, the chief engineer of the Canadian Pacific Railway, wanted an alternate opinion. In 1872, he commissioned John Macoun, a botanist, to provide his assessment of the mixed grass region.

The 1870s happened to be a relatively wet period. Unlike Palliser and Hind, Macoun saw a lush, bountiful land perfect for agriculture. Both Fleming and Macdonald were pleased with this assessment for two reasons. First, it was a more direct route to the west coast and, thus, less expensive to build. Second, the railroad would facilitate settlement that would establish Canadian sovereignty.

So, who was right? Palliser and Hind? or Macoun? As usual, the truth lies somewhere in between. Given good soil, rains at the proper time, sufficient (but not excessive) sunshine and heat, and a long-enough frost-free growing season, farmers in the Palliser Triangle can, and do, produce bountiful harvests. But, as Abe and other farmers learned, they can not always depend on the weather.

The Dirty Thirties hammered that lesson home, with a vengeance.

Next time: The Human Factor in creating the Dirty Thirties

“Our Bull’s Loose In Town!” Tales from the Homestead

A tiny shack in a vast prairie. Spooked horses and run-away pigs. A town half-destroyed by fire. The year with no crop. An untimely death. 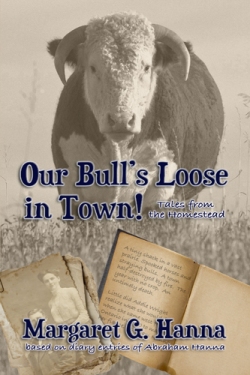 Little did Addie Wright realize what she would face when she came west from Ontario in 1910 to marry her fiancé, Abraham Hanna. Based on entries in Abraham’s diaries, Our Bull’s Loose In Town tells the story of the author’s grandparents as they built their farm and raised a family in the Meyronne district of southwestern Saskatchewan. Through trials and triumphs, sorrows and successes, the horrors of the Great War, the prosperity of the Roaring Twenties and the dark years of the Dirty Thirties, they found strength and courage in their faith, in their indomitable humour, and in their family and neighbours.

This is also the story of the rise and decline of a prairie village, and of the political and social turmoil of a province and country in the first half of the twentieth century, all as Addie lived it.

“Our Bull’s Loose in Town!” is available in bookstores  and as an e-book from the following sources: Chapters/Indigo, Barnes & Noble, Amazon, Kobo, Scribd,  Smashwords and Walmart.com.

What Readers are saying about “Our Bull’s Loose in Town!”

Margaret was able to present us with a wonderfully rounded, factual account of what it was really like to pioneer near Meyronne in 1911. . . In spite of Margaret Hanna’s outspoken revelations about the darker side [of the 1920s], I still maintain that Our Bull’s Loose in Town is the most realistic look at life in southern Saskatchewan in pioneer days that I have ever seen.  Kay Parley, author, The Grass People

[The author has] a marvellous way of making history come alive. I think the secret to her success is having the book told from Addie’s perspective. Not just dry historical facts, but real life drama. Frank Korvemaker, co-author, Legacy of Worship: Sacred Places in Rural Saskatchewan

Margaret Hanna’s story of her grandparents’ journey as prairie homesteaders is a classic! It is cleverly written in her grandmother Addie’s voice. Addie provides a several decade play-by-play of her resilient family. The story unfolds concurrently with the initial settlement and development of rural southwest Saskatchewan. Improved finances, two world wars, a drought/depression and new technology are all woven in. Accordingly, whether you are a history buff, or just someone who grew up in a rural prairie community and can thus relate, “Our Bull’s Loose in Town!” is a must read!     David McCaslin, former Meyronne resident

I really enjoyed the voice of Addie Wright/Hanna and her exploits through historical Saskatchewan. I really loved the first person point of view and thought it lent a personal touch to the story. Vanessa Hawkins, author

This was an interesting semi-historical about a family on the Canadian plains. The story is seen through remembrance. There was laughter and sadness, and seeing the history of the recent past through the writer’s eyes fascinating. A good read. Janet Lane-Walters, author

What does it do to your soul when your hometown disappears? When hedges border vacant lots, trees cast unused shade, grass grows unmowed, a lilac bush blooms unsmelled, a breeze scurries bits of paper down untrod sidewalks? No laughter of children playing on the school swings and teeter-totters, no dogs barking, no cars and pickup trucks driving down the street, no people talking in front of the post office, no clang-clang-clang of the hand bell announcing the beginning of the school day.

Highway 13 in southwestern Saskatchewan is officially known as the Redcoat Trail but it might be more correctly called the Ghost Town Trail. Drive west from Assiniboia and you are hard pressed to see many of the towns that used to exist along that highway. Now that almost every grain elevator is gone, what is left seems to disappear into the landscape. A few houses and trees. Possibly a church. Maybe an abandoned school or garage. Maybe a falling-in rink. Perhaps a gas station alongside the highway. Nothing more. END_OF_DOCUMENT_TOKEN_TO_BE_REPLACED

Saskatchewan born and bred. Curious about everything. Writes for the joy of it.